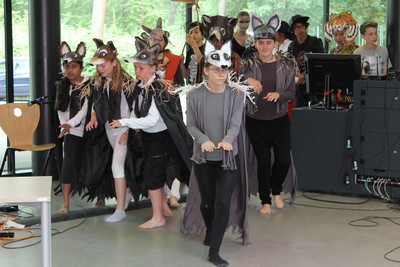 SISS Drama Club presents on Saturday 2nd July at 6 pm in building 41 the story of little Mowgli.
Stolen by a man-eating tiger and rescued and brought up by wolves, Mowgli must overcome both man and beast to become master of the jungle. Along the way he is befriended by a bear and a black panther, both much beloved in the disney cartoon. In the original version by Kipling, who
grew up in India, we learn the value of brotherhood through the jungle law and see if he will overcome both treachery and cruelty. Drama club range from year 5 to year 11 and have been involved in all aspects of this production
from acting to directing, designing, making and technical, led by Mr Gunderson with help from parents.
We look forward to welcoming you to our show!